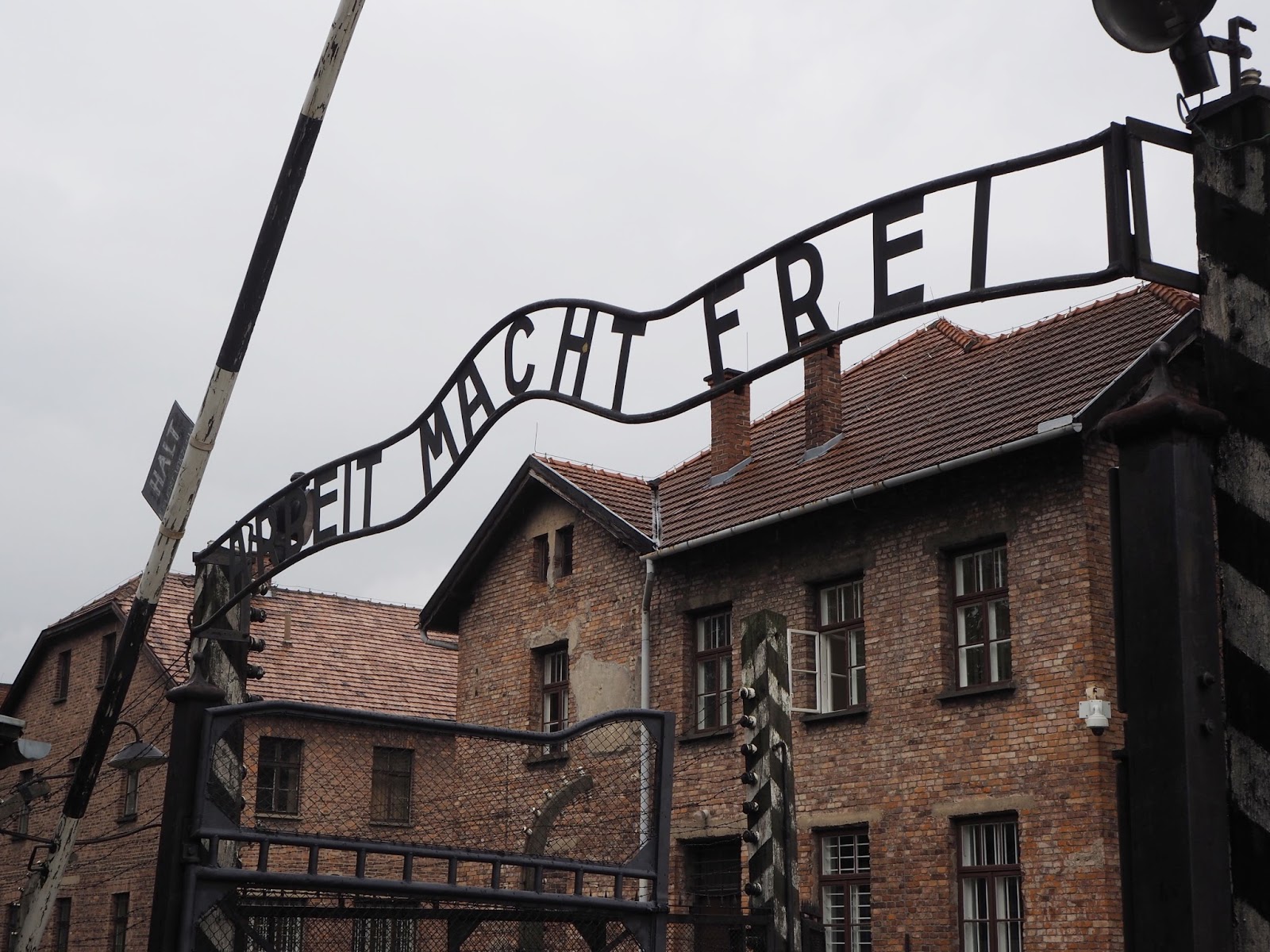 Following on from our day of exploring freely; on Tuesday we had booked our first guided tour. When travelling to Krakow it’s inevitable that you’ll visit Auschwitz as it’s the only a short drive away. It’s not the most fun trip to plan but we all have to revisit history at times to learn from past human mistakes. In the words of George Santayana “The one who does not remember history is bound to live through it again” 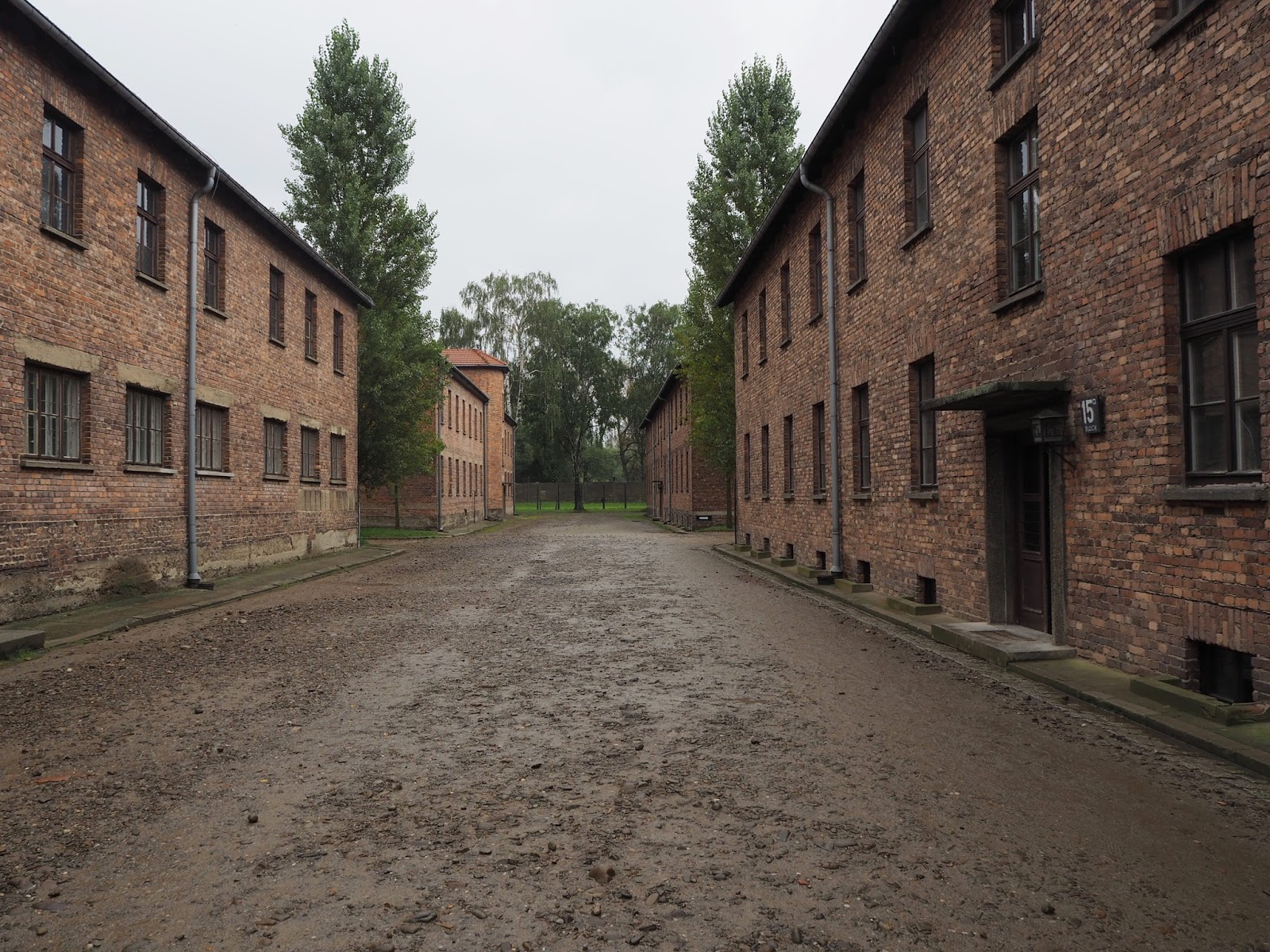 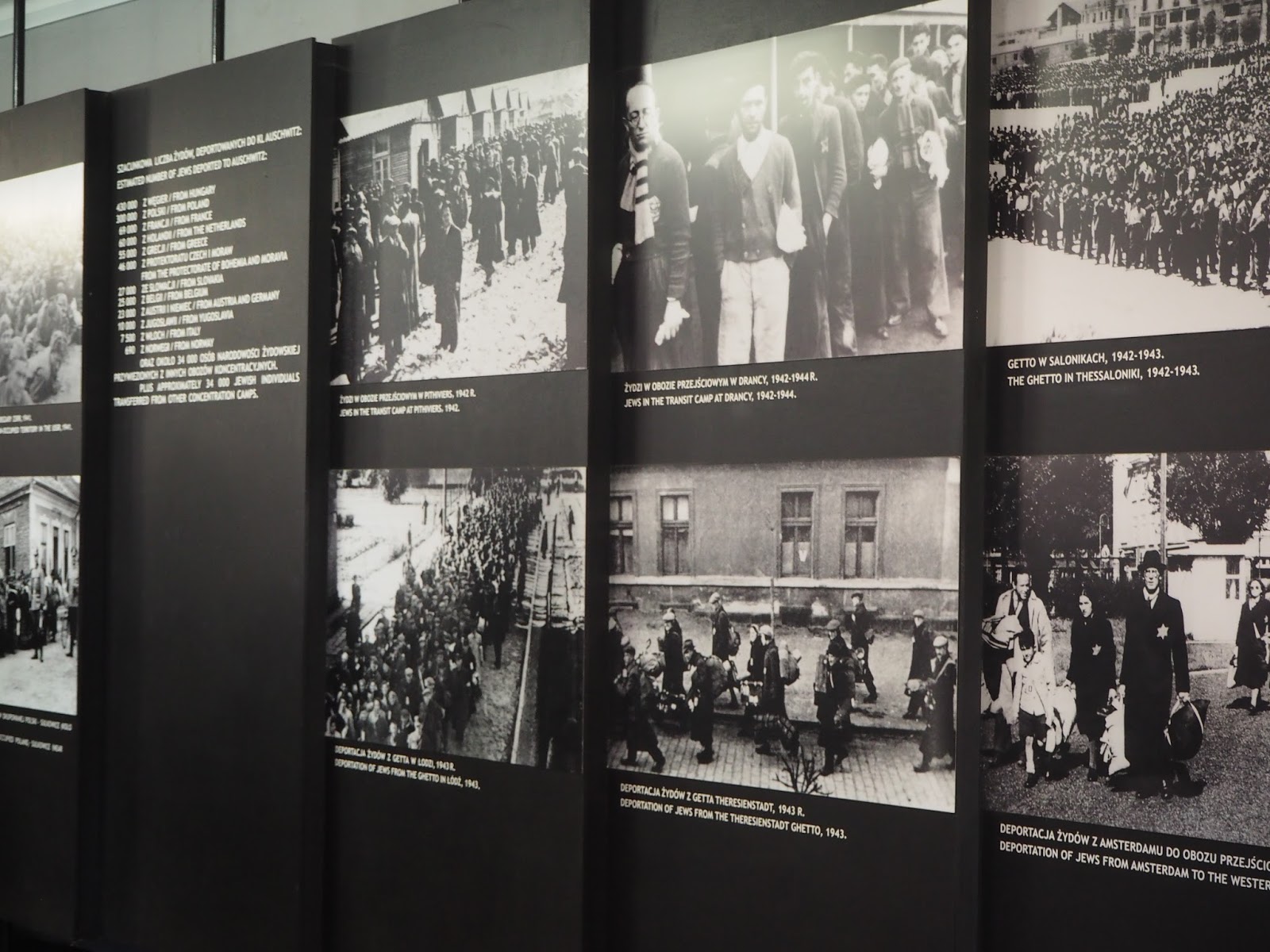 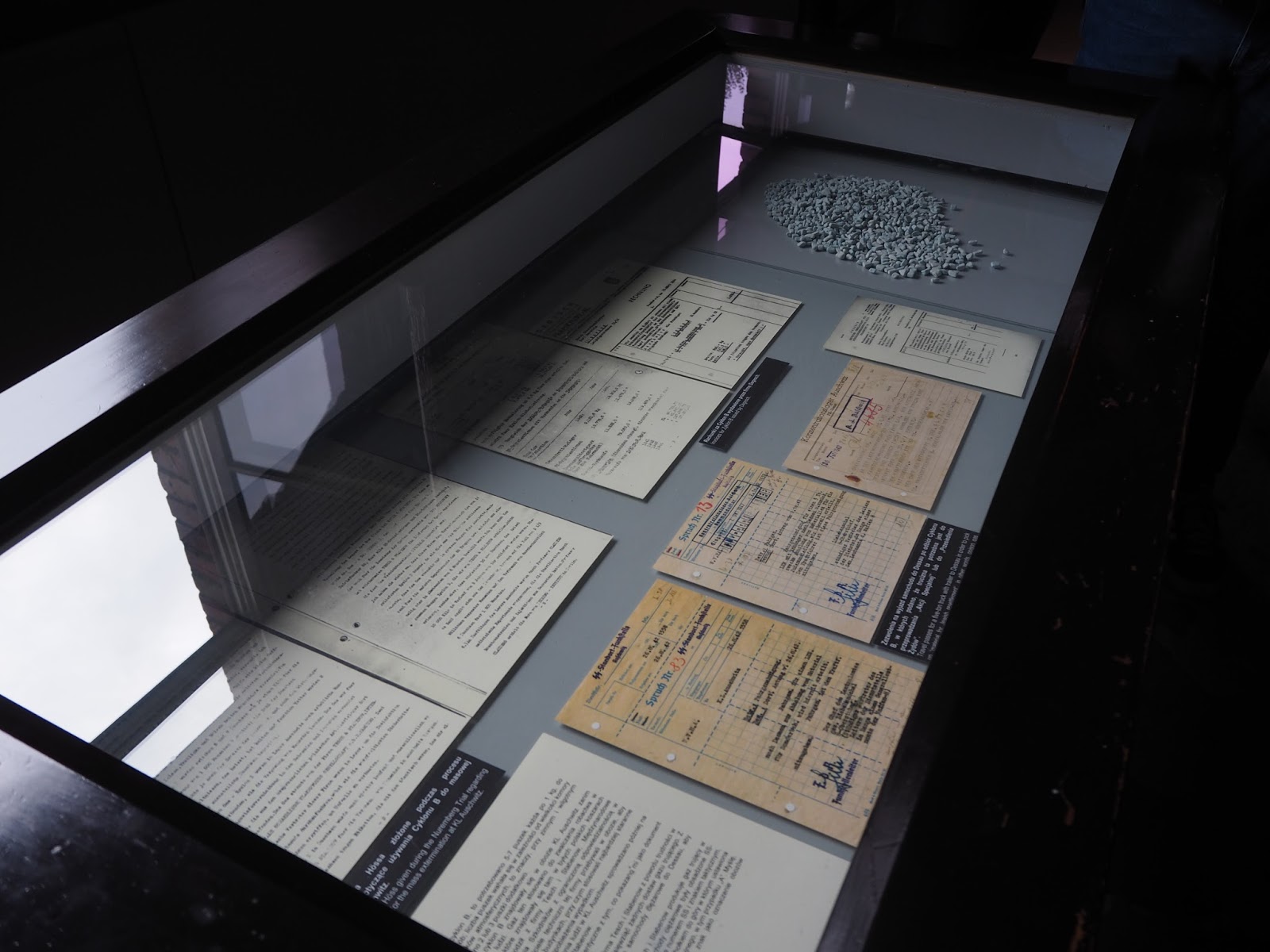 We had been recommend to book our day trips through escape to Poland (escape2poland) & we were rather pleased with how they turned out. After being squeezed into a very small mini bus & driving for an hour or so we arrived at the first campsite Auschwitz. It’s safe to say the journey wasn’t the nicest as everyone was a little on edge & we had a horrific documentary playing so we weren’t very perky but it was a small group rather than some of the huge tours going on that day which I preferred. After a 5 minute stretch your legs moment we met our tour guide, got our headsets & set up our radio boxes. It’s not the easiest method but you can see why they use them!! 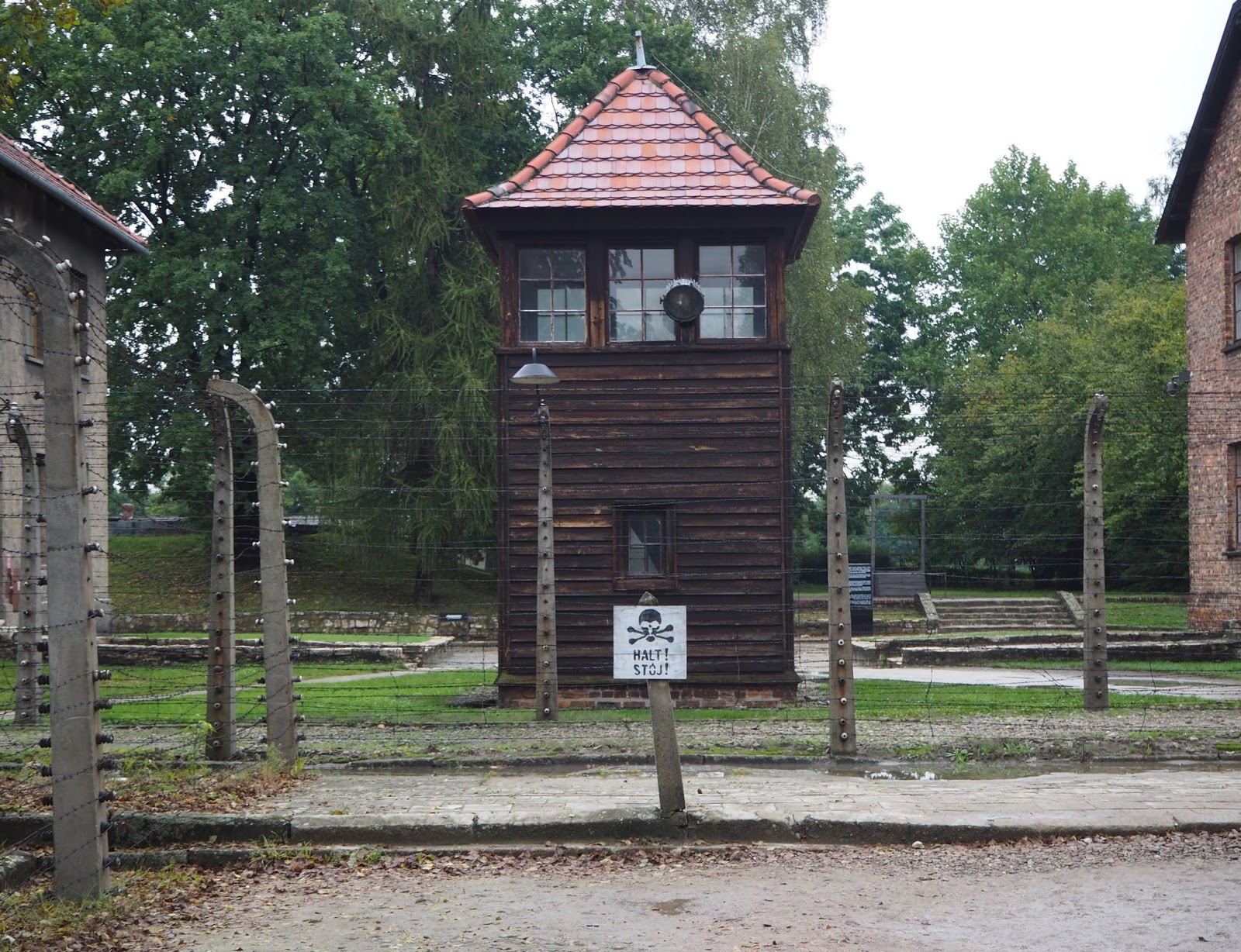 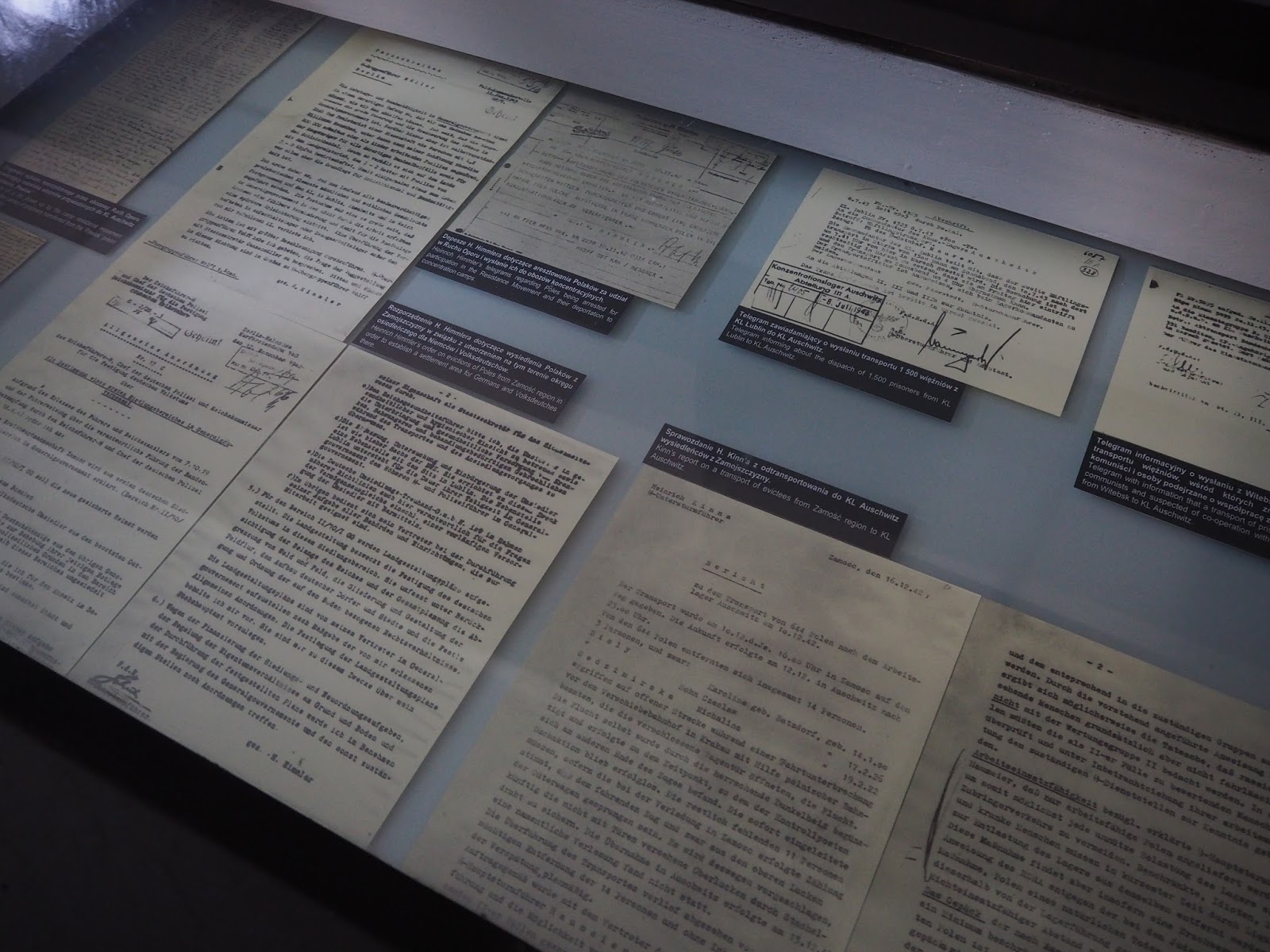 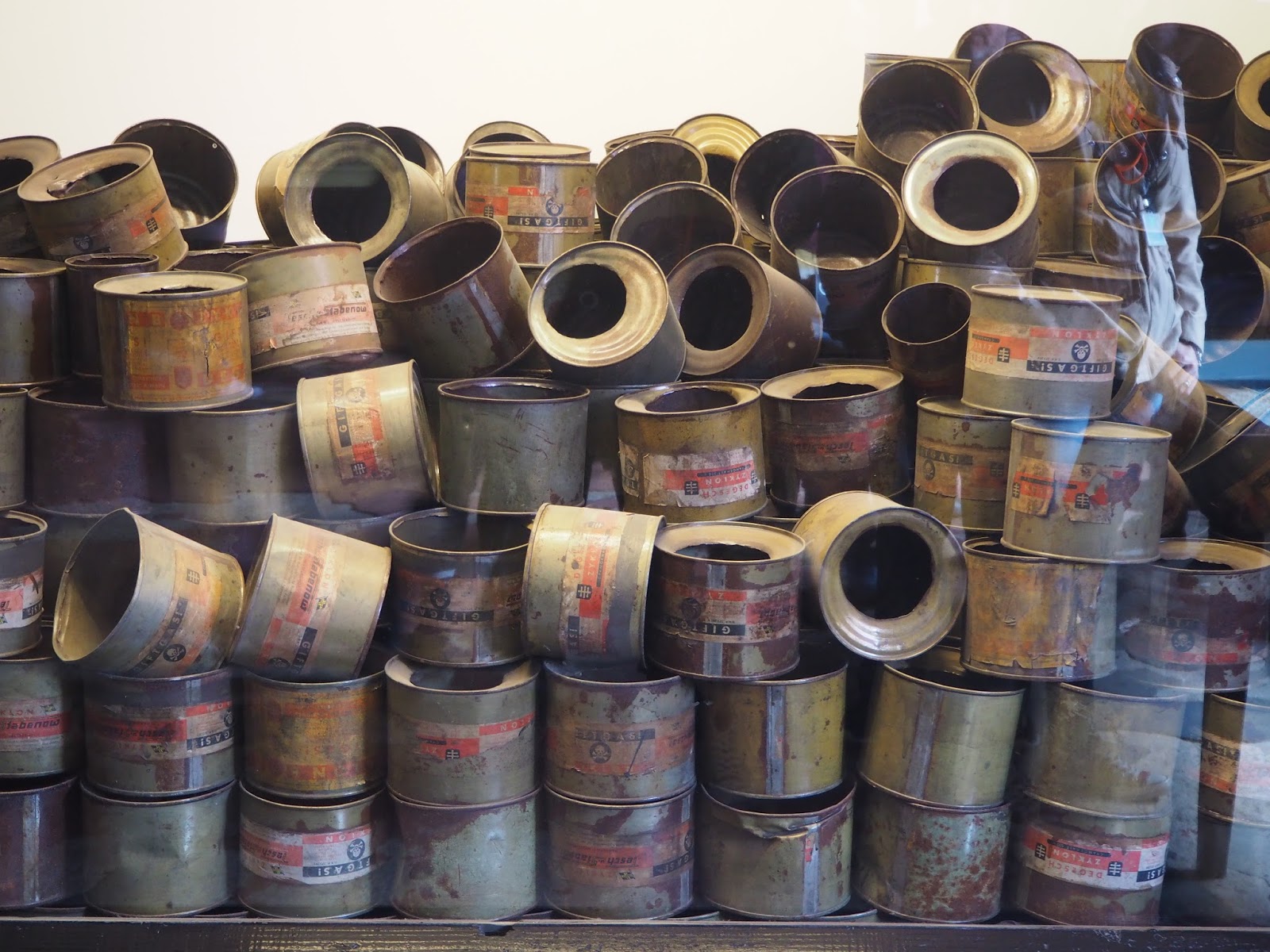 We got to wander through the initial camp where our tour guide explained the processes that the working camp prisoners would go through. As the initial camp is a working camp it did have a different air than the death camps but it was unsettling to think you were walking areas that had been used daily by prisoners. We were able to enter a few building which they displayed a lot of artefacts to explain what had occurred at the sites & also had rooms full of the prisoners personal belongings. I don’t think you can comprehend the extent of people staying in these buildings when you are told how many per building or room but when you see the amount of belongings it hits home. The amount of items stolen from innocent people for the benefit of the Germany agenda was horrifying. 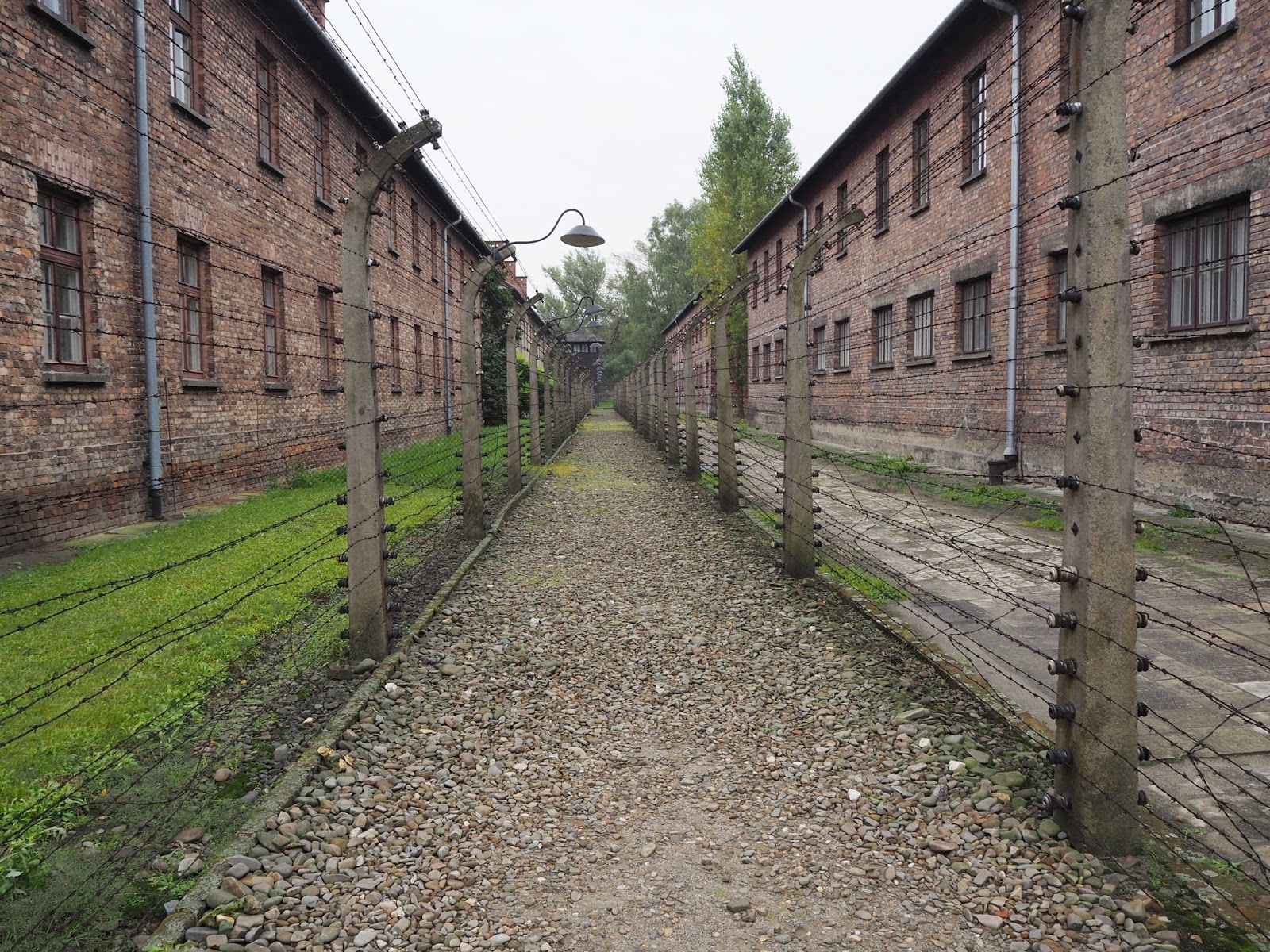 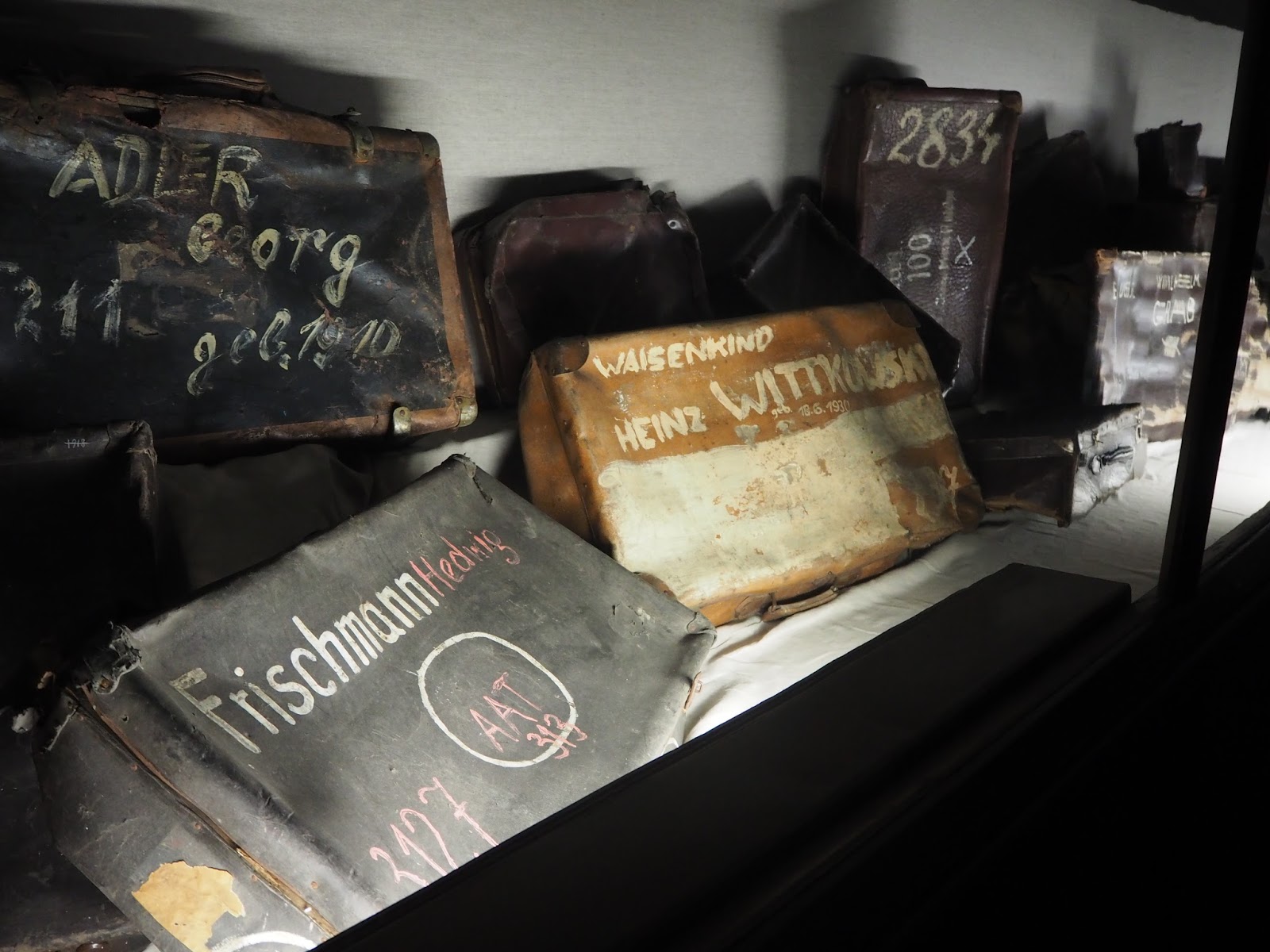 Wandering through the prison camp was an odd feeling as you could see the buildings for what they were but couldn’t really comprehend the extent of the evil. I don’t know what I expected from the tour but the surroundings felt almost normal; not in the way that these would be usual to my life but the buildings seemed so standard. Without the images we’ve been exposed to throughout the years you couldn’t picture what had happened. Walking around the camp felt eery but without the barbed wire it could have just been a working site for an everyday company. Since the buildings have been converted to show public evidence of the crimes it seemed unreal that people would have been packed into them to sleep for the short periods between work. 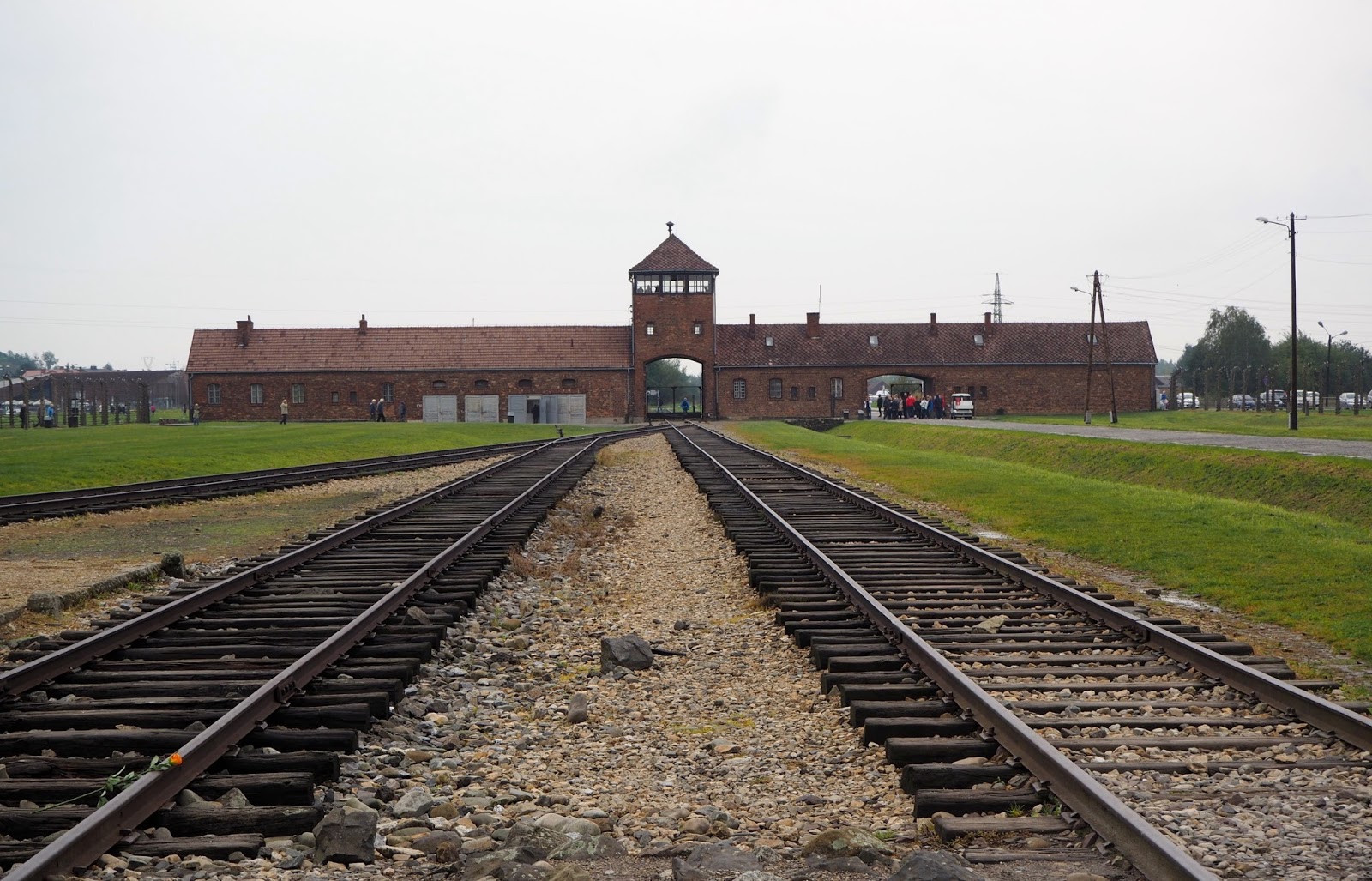 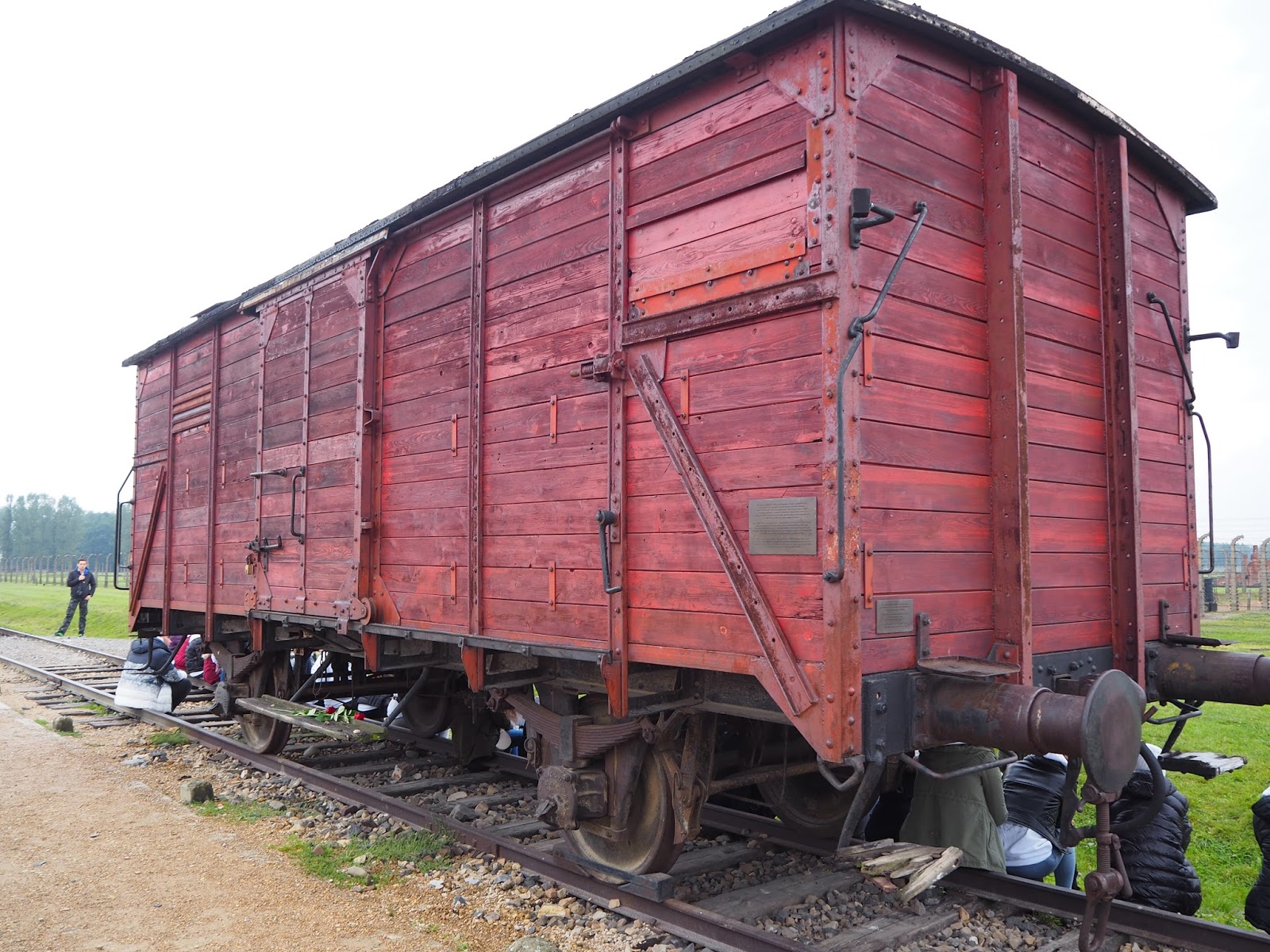 Next we had a short break for lunch; even though I don’t think any of us had an appetite. We then drove over to the second campsite Birkenau. This was the camp that you know the iconic images of the death camps which was unreal to see. From seeing it in textbooks & documentaries to walking towards it just didn’t feel real. It’s unsettling to know this was a reality for many people & that we were approaching such an historical site so causally. Let’s just say even though you know the camp must be large when you arrive & see the extent is just astonishing. The fact it was never finished & you can’t even see where it ends just amazed me. The amount of people stored in this one area just for what they believed in is horrific. Even with all the tours occurring at once it was still pretty empty so you can just imagine how many people would have to be there to actually fill he space. 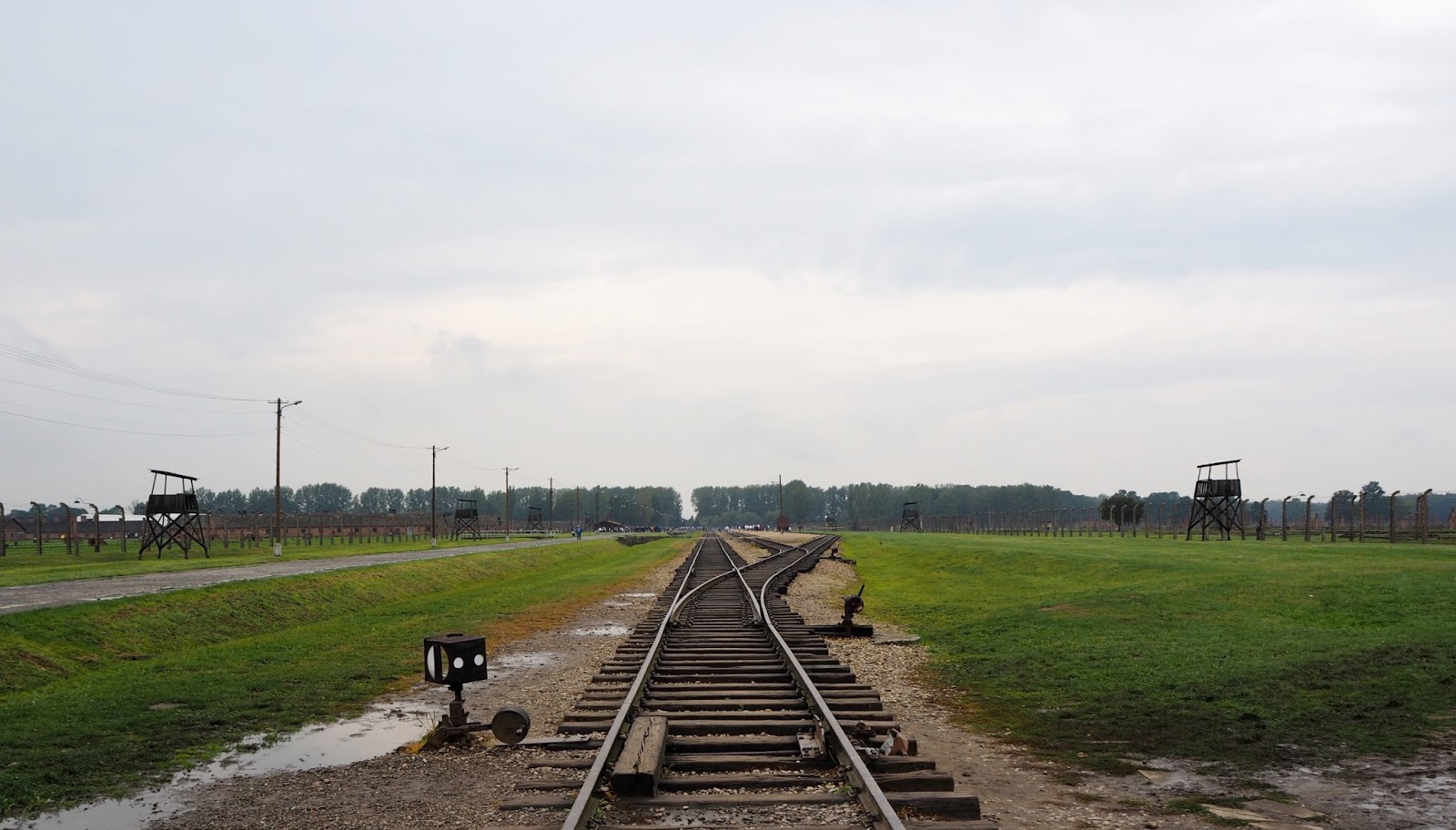 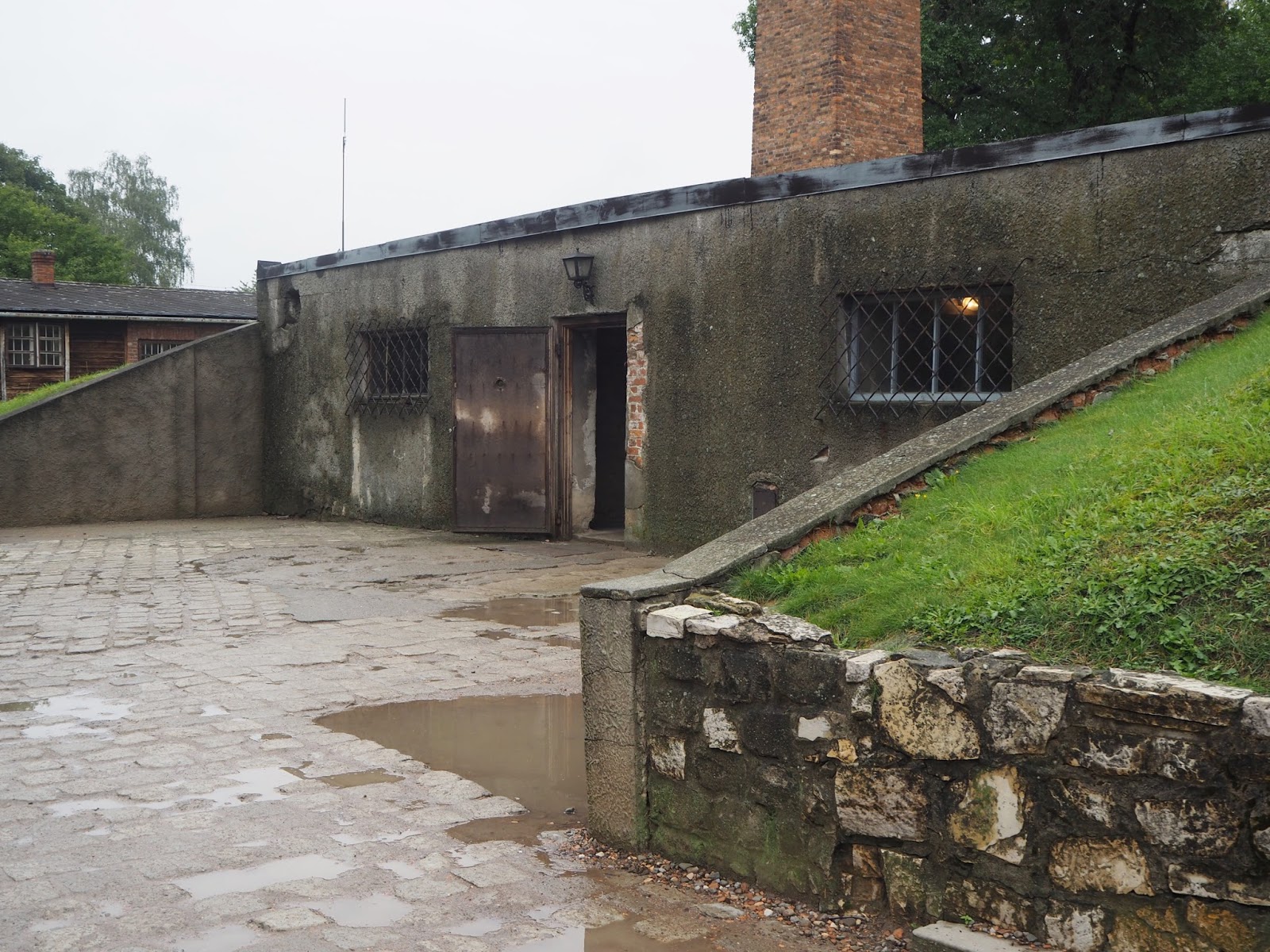 We walked down the rail way to the “station” in which people would be released from the crowded carriages & selected for the work or death camps. You’ve been taught this countless times but to be standing in that exact spot is creepy; made even horrible buy the fact we walked the same path the people selected for death would. As you can see from the photos there is an air of silence; everything seems abandoned which in reality is the case. Some of the building were destroyed to hide the extent of how many people would kept at the site & you could only see the chimney systems which remained. One building we visited & entered was an old gas camber which was converted in to a bomb shelter (image above). The only reason it remains is that it was converted so they obviously didn’t believe it would retained evidence of the crimes, however when you enter you can still see the ceiling holes in which the gas pellets were dropped through. It’s an uncomfortable experience entering a building in which people were murdered as you can imagine. 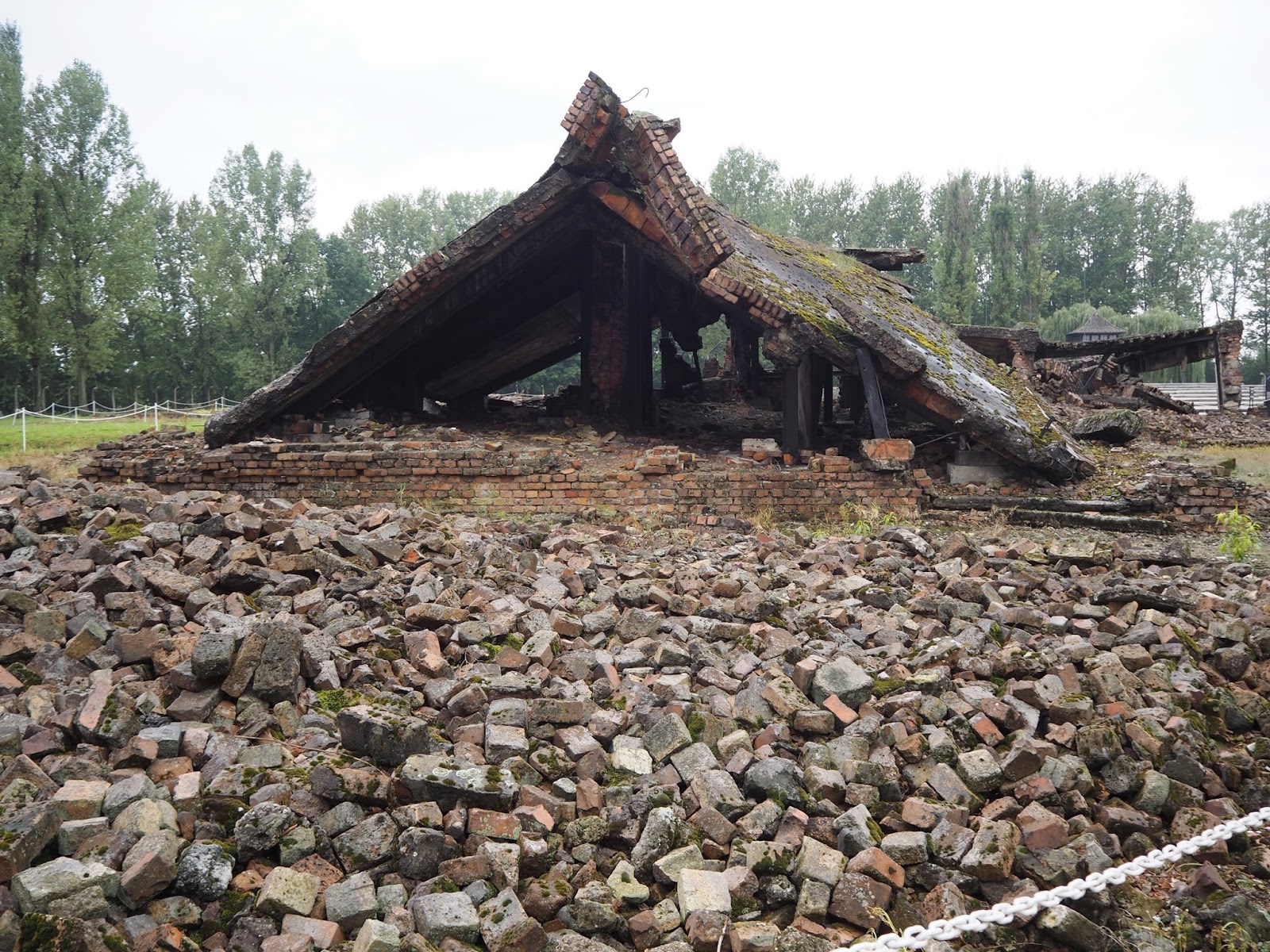 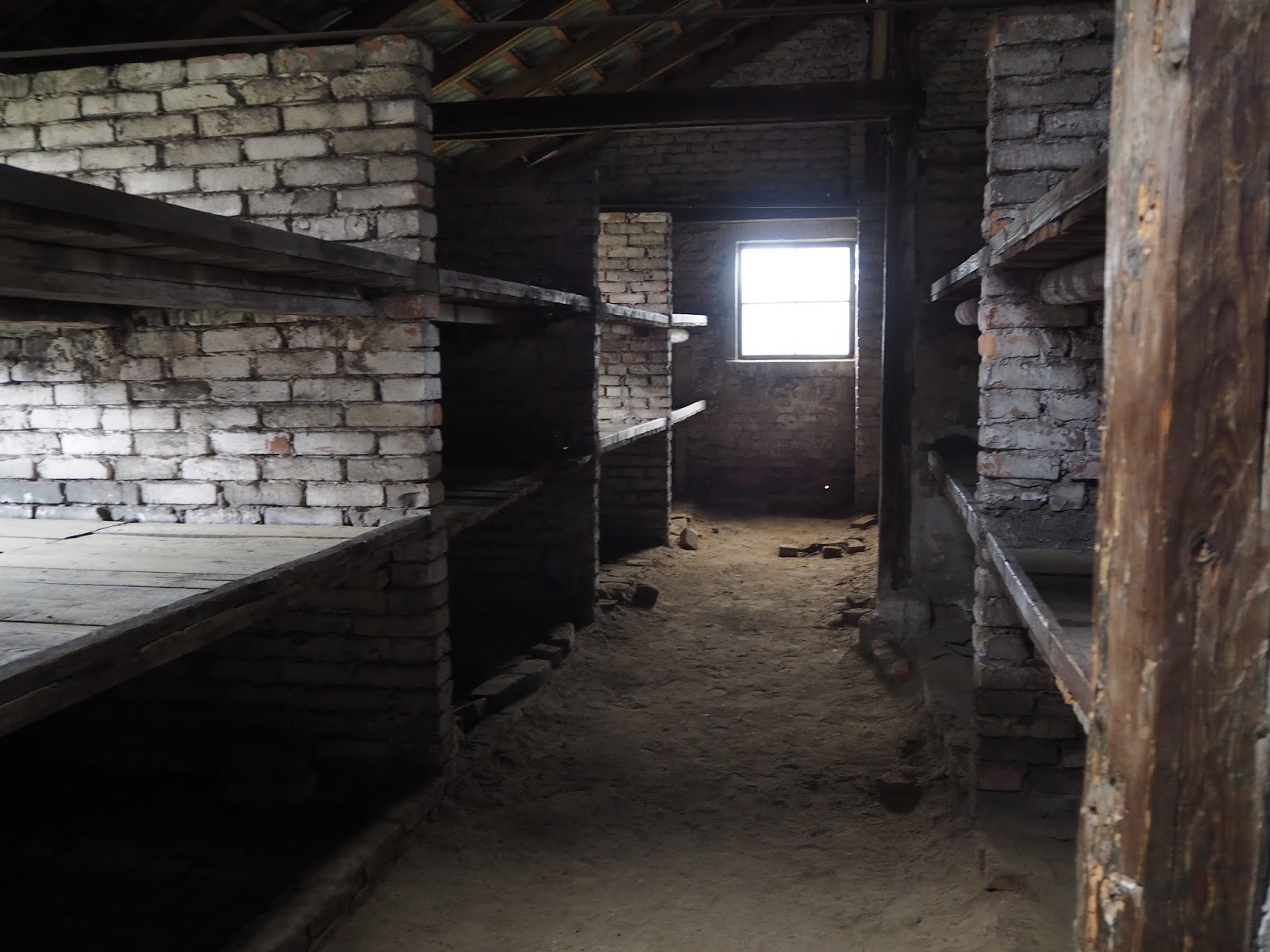 To end the tour we reached the furthest point of the camp & visited the remains of a gas chamber (shown above). It was destroyed to hide evidence, however through that destruction you got to see the inner workings of the chambers. I know we are taught what occurred but being there & being told about methods was totally different. The whole group were silent for majority of the tour & you can see why. When we were walking back to the entrance we took our time to avoid the sink holes & the muddy paths from the rain which with converse & walking boots wasn’t a problem for us. You can only imagine what these poor people endured in their bare feet & starved bodies in the freezing cold just trying to reach the building nearby.

There were endless buildings & when we reached the final building we were able to enter through a pathway built basically on a swamped area to see a storage area. I call it a storage area because this was the final stop for women deemed to sick to work, stored in these disgusting budding for days without food until they were taken to the gas chambers. You can’t understand that horror; no matter how much you dislike a person that kind of evil is barbaric!!

All in all I don’t know how to describe the day; it’s a place I wanted to visited within my lifetime & I’m glad to say I have. It is better to go with no expectations because I don’t think it can ever match up. Until you are in the camps you can’t adjust to the horror. Of course there were people who obviously didn’t have the emotional ability to be respectful to the surroundings. It was shocking to see people so rude & acting like fools in a place where evil took place. I guess that says a lot about humans though.

You know what? After testing it for a bunch of ti

Jasper has been so ill for what feels like a very