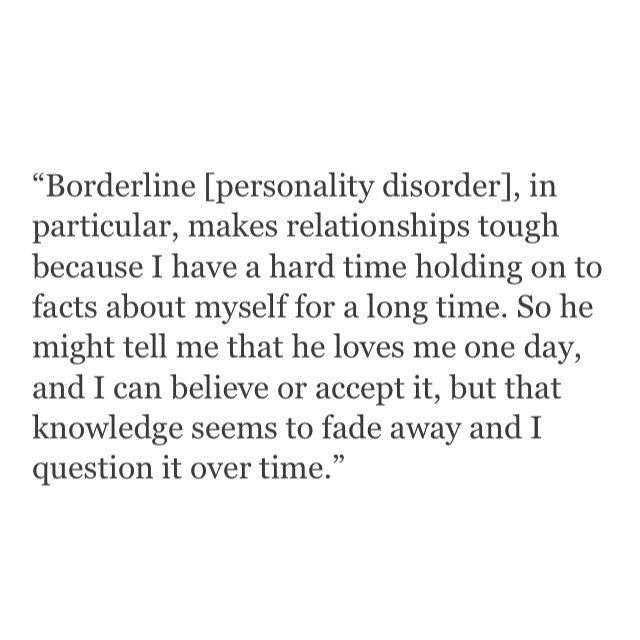 Why do you feel this way? That’s the biggest question I get regarding my disorder, but I can never put my finger on it. People always assume you had a significant event in your past to make you different. It’s as if being “depressed” has to have a cause. But I haven’t had a terrible past. I truly didn’t, nothing too bad really happened to me. For sure I had blips or embarrassing teenage moments but nothing that could suddenly bring on my disorder. It turns out that having a mental health disorder doesn’t need a cause, sometimes it’s just part of who you are. It takes a lot to come to terms with that and trust me even now I wish I could edit my brain to not have this disorder, but it’s who I am!!


As you can tell my disorder make’s me an over-thinker. It’s not always a bad thing but worrying constantly about every aspect of life becomes a heavy burden. I have a borderline personality disorder with emotional instability. No one really knows what that means, even I didn’t have a clue at first. Personality disorders are so new age, they aren’t completely recognised by everyone in the psychology bubble. As you can tell it makes having the disorder even more difficult, not only are you suffering from something out of your control, its something brand new that isn’t understood fully. See I told you I was an over-thinker!!

My disorder basically makes life a big bubble of stress. I find day to day living a struggle because my emotions are erratic. They can change in seconds and it makes identifying with emotions difficult. I feel strongly and quickly, I’m always in the moment but worry about my every move. My emotions differ to my personality, I’m always in control and planning every aspect but my emotions just happen in response. Stress is my weakness, it controls my every move. It’s the biggest trigger and it’s the one thing I can’t control.

I guess you could say its a good thing I finally got diagnosed. It does explain my behaviour, my feelings and a lot of my issues growing up. I had the worst self image during my teens. I know most teenagers have a skewed image and are learning to accept themselves too, but my behaviour was far from normal. I cared heavily what people thought, I relied on compliments online to feel good and any hateful comments would tear me apart. The strange thing was I would hate myself  but a few minutes later feel confident. It made no sense at the time. I just had such a skewed image of myself, I couldn’t see through my disorder. Most people know I’ve self harmed in the past and it took over my life. It truly did, it became a routine. I had so much control over it, I  made me feel as if I was in control of my life. Turns out I wasn’t.

I acted on impulse, doing stupid things, making decisions that didn’t really fit me. I made life decisions that were based on what I thought I wanted instead of what made me happy. That’s how university came around. I wanted it for years, I really did. I needed to get away. To see if life could be different, I still thought it may be my current surroundings rather than me. In reality I had destroyed a bunch of friendships during my teen years and needed an escape.

Going to uni didn’t fix me, it made me worse. I was erratic, impulsive and just in general at my lowest. I didn’t have any understanding of my disorder at the time. I had so many wrong diagnoses before I didn’t trust doctors. I spent my first year debating leaving, while enjoying my social life. I made brilliant friends. I had good times and major break downs. I had no handle on my life. My second year was worse. I left after the first term, an eventful term to say the least. I found myself alone, surrounding by people who weren’t as supportive as I first thought. I once again destroyed friendships and got deeper into my disorder. I was so relieved to leave university and it’s still the best decision I’ve made.

That’s when I started having anxiety attacks, it’s also when I received my diagnosis and starting getting help. Anxiety attacks were the final straw when it came to uni. I left before I tried to take my life for the second time. I knew if I stayed I would have attempted. I was in such a bad place, I was scaring myself. I’m lucky you see, I was never institutionalised after my first attempt. I’m so glad I wasn’t, it would have destroyed me. I never wanted that to happen so leaving was my only option.

It’s odd writing this, I never felt I could share my story online without being judged. Now it feels like a relief. I wanted to share this with my followers, so you don’t feel alone. Struggling day to day isn’t a nice reality, but for some it is their reality. Everyone lives differently. Looking from the outside, sometimes you can’t see what people are truly going through. Sometimes you can feel so alone, because there’s no-one to identify with, but there are people suffering like yourself. Having a mental health disorder does not define you. It’s part of you. Sometimes you just have to live with your struggles and learn to love that part of yourself.

I struggle every day with my disorder, I get stressed over nothing, cry all the time, spend endless hours writing up plans, do things on impulse and have trouble keeping sane. But I’m also still here, being me. I’ve accomplished a lot in my 22 years despite my illness. Every day I get up and do me because there’s no point allowing your illness to take your life away. You can still accomplish everything you want from life. Don’t let your disorder make you feel alone because you aren’t. You’re different and special. Only you can define who you are!!!